The 2200 block of Wynwood was gutted in the last 36 hours. If you don’t know Miami history, this is ground zero of Wynwood. So many murals and muralists, literally hundreds over the years. This block made Wynwood into what it is today!

Sure, whatever, progress, real estate. But this is not rubble, as it lays now. It does not belong in a landfill. This belongs in a museum, like the Smithsonian, Natural History or in the very least, History Miami.

And the artists? They deserve reparations.

But many Miami artists have already moved on.

“Not surprised in the very least. Turned my back on that part of town once it began turning into the Disneyland it is today… it was created by starving artists & now it’s a playground for the rich real estate developers & tourists that stole its hometown charm.”

Wynwood Changing Is Evident But It Looks So Bad

So many galleries thrived, bled, sweat and cried on this hallowed street.

Obviously locals are pushed out of hip neighborhoods as rental prices go up. It’s part of the package. We know it. Real estate speculators are entitled to cash in on their risky investments, but it’s just so bittersweet.

And to see it with your own eyes just sucks. Not to mention who knows how much construction and clutter it’s going to bring to the neighborhood over the next couple of years.

“Wynwood was cool, but it was only a matter of time until big corporations took over it.”

Wynwood Is Still A Big Risk

We call this the brochure.

The brochure is what the “Miami” politicians, real estate developers, and those in tourism want to project to our annual 15 million visitors. But, like a brochure, it’s glossy, fake and not an indicator of reality. It’s also risky. The hood is not all good. Walk a few blocks, it’s not safe. It’s going to be like that for a lo-o-o-o-n-g time. What happens when some tourists walk down the wrong block and something really bad happens? The chance of that happening in Wynwood is a lot higher than even the cost of rent.

Wynwood Down But Not Out

Wynwood still has cool hipster spots: J Wakefield, Gramp’s, Concrete Beach Brewery, Wood Tavern, The Yard, O Cinema, Box Elder, Zak the Baker, Miami Light Box, ect. but seeing this rubble sucks. And Real Estate developers should keep in mind, it’s not the best idea to completely turn off all of the locals that built this roach hotel into paradise. 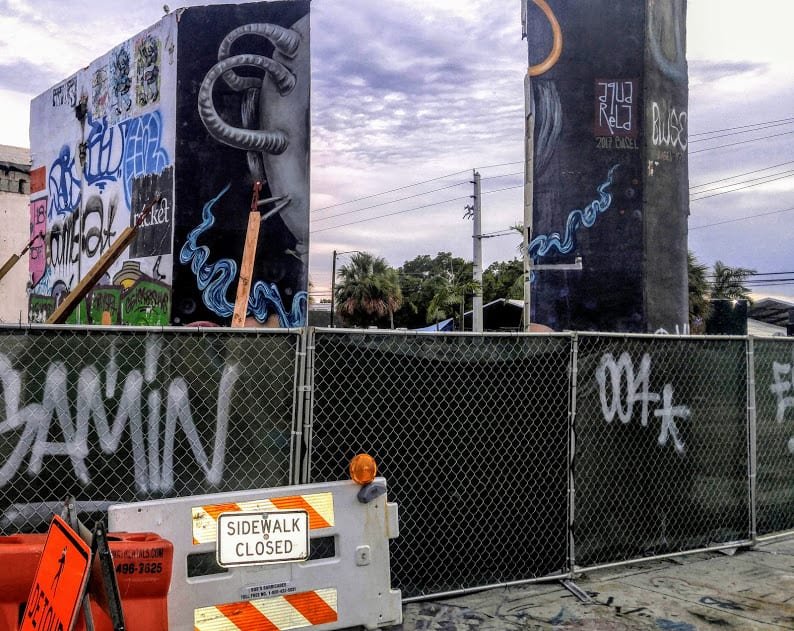