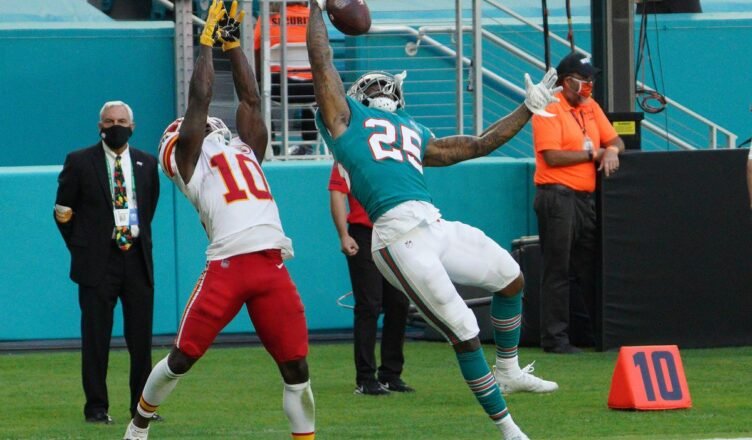 When the Miami Dolphins drafted Xavien Howard 38th overall in the 2016 NFL Draft they expected to receive a solid defensive back. Five years later he’s now regarded as an elite top three cornerback who anchors Miami’s defense. Perhaps the biggest compliment one can give is that Howard even played well under Adam Gase.

Since he was drafted Xavien Howard’s 22 interceptions are second most to Marcus Peters (23), the remainder of the field isn’t even close. So as any reasonable team would do Miami inked Howard a five-year, $75.25 million dollar extension in 2019. One year later he’s seeking yet another new deal or demanding a trade.

Howard is undoubtedly Miami’s best and most valuable player and he knows it. Smack dab in the middle of his prime Howard knows he’s likely never to play better than he is right now. Xavien needs to strike while the iron is hot for himself and his family’s sake. You would do the same and remember athletes can have their careers end in a matter of seconds. This is an issue that boils down to dollars and cents. Especially when you consider that fellow defensive back Bryon Jones is slated to make 2 million dollars more than Howard. Jones is a good player, but he’s not Howard. Xavien certainly deserves more money but as of right now Miami is unwilling to pay him.

The Xavien Howard drama comes right before a season that has Fin fans expecting a playoff berth.

Miami is really stuck between a rock and a hard place here. The prospect of trading your best player is bad enough but they’ll never get equal value in return. Outside of Howard and Jones Miami’s secondary is young and inexperienced. The fear of being one injury away from disaster is a real one. Xavien has some leverage and reportedly Miami would only have to pay 4 million dollars more to satisfy him.

I  would like to see the Dolphins exhaust every available measure to make Howard happy. Championship teams are built through the draft then rewarding the most deserving players in hopes to set a valued precedent going forward. In Miami’s defense Howard did sign the contract in 2019 which was among the leagues highest. But business never runs in a straight line and Miami must adapt to that. If Howard is truly dug in about his trade request, then Miami must find the best possible partner and hope coach Flores can outsmart another front office as he has done in the past. The more practical approach is to pay Howard his extra 4 million dollars and compete for a championship after 20 long years of irrelevance. Miami’s Super Bowl window is finally open, now is not the time to trade your best player.