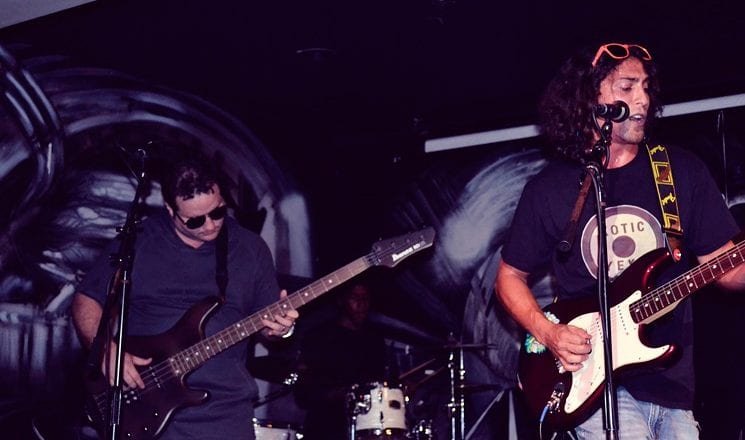 Deerfield Beach’s Xotic Yeyo is a funk trio made up of guitarist Stu Sauce, drummer Cody Orange, and bassist Rod Reiter. They recently put out a new full length album, Chocolate Decadence that will remind you of early Red Hot Chili Peppers records.
Stu Sauce was kind enough to walk us through track by track on the inside scoop behind each song and what inspired it whether a song or a psychedelic experience.

Track 1: “Heyo Yeyo Mr. Snowman” was inspired by “Christmas in LA” by VULFPECK

Track 2: “Stop!” was a song I wrote when I was 16, busking the streets of Hollywood Beach with an open case and my guitar. I’d come home with decent money, but always got hassled by the cops.

Track 3: “Jenny Sais Pas” was inspired by a lust interest at the time. I get infatuated easily, because I am addicted to things I cannot explain, like that feeling of “I don’t know what.”

Track 4: “Musician Fission” was inspired by a psychedelic experience I had in my early twenties. I played guitar with high school homies who turned into plum colored people jamming under the sun. When we walked from the backyard inside, the pictures on the wall began to breathe and the paintings took life.

Track 5: “You Me and the Funk” was inspired by Prince. No song in particular. He inspires a lot of my music.

Track 6: “Disco Zombies,” lyrically, is my response to “Thriller”. The chord changes and melody is very much inspired by Gil Scott Heron, the legend that wrote “The Revolution Will Not Be Televised”.

Track 7: “Trip the Lights” was the first song that became the foundation of our band and style: dance music. The main riff is a groove inspired by the Bee-Gees.

Track 8: “Love Triangle” was a story very much inspired by “The Sun and The Moons Vagenda” by Keller Williams.

Track 9: “Mothership” was a bass groove that really brought the hip-hop vibe where everyone in the squad gets introduced. I couldn’t help but to introduce the members of the band in that song. Everything you hear about the band is the little I knew about them at the time. Like all I knew was Cody was a great drummer, and Rod responded to my emails with lightning speed.

To celebrate David Rolland’s novel The End of the Century, on Saturday, June 2nd, Xotic Yeyo and others will cover songs from 1999.

Join them at Gramps, 9pm.