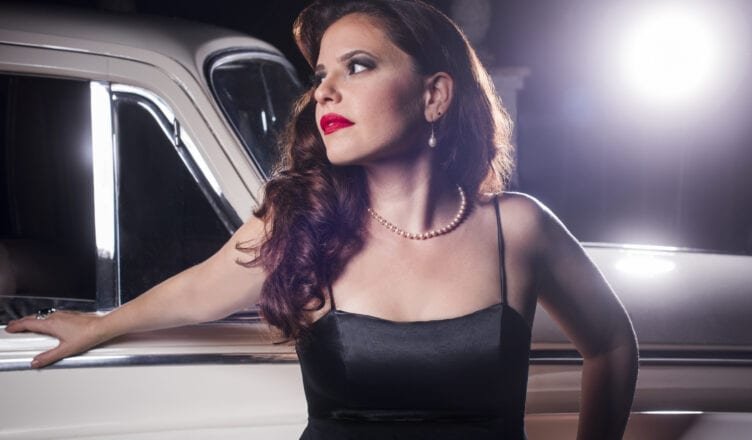 We are in an era of nostalgia: vinyl records are poised to outsell CD’s for the first time since 1986, baggy clothes that resemble 90s fashion are back with aplomb, and appreciation for the jazz masters’ like Miles Davis are hitting a new high. It only makes sense that artist like Yamit Lemoine are spurring nostalgic sentiment. The Israeli born, Toronto raised, Miami resident formed Yamit and The Vinyl Blvd—a classical jazz ensemble that brings funk, groove, and melody into harmonious overtures all over Miami. Yamit plays both the violin and sings the great classics from the 1920’s through the 1960’s.

Yamit’s debut album Ain’t Misbehavin’ is a delightful passage through time. The 12-track album brings swaying sounds that combine with Yamit’s delicate, but forceful voice which transports the listener through the great jazz ages from humble beginnings to the inspiring heights of the 1960’s. In a society where new information is thrown onto us in seconds, it never hurts to take a step back and listen to the classics sung by a new voice.

You recently released your debut, Ain’t Misbehavin’ can you explain the process and your thoughts about the album?

Yamit Lemoine: For me, the process of producing an album is a bit like cooking. When you have great ingredients and know how to put them together – it’s bound to be good. The musicians on the album are incredible, and the tunes are from the Great American Songbook – how can you go wrong? I chose a selection of tunes that we usually played at the gigs – recording them was the natural progression for those tunes because they’ve already taken their organic shape on the stage. On this album I was producer, singer and violinist. It was my goal to recreate that 1920’s-1960’s vibe with a fresh take, and have each song conjure a different musical flavor. I hope that I’ve achieved that.

What were some troubles that come along making your first album?

Everything up to the point of finishing the actual recording, mixing and mastering – is where I’m in the zone. As an audio engineer and producer – the studio is my second home. I love working with my brother from another mother, Looch, the co-owner and engineer at Miami Beach Recording Studios. The musicians on the album are incredible, and although I’m a pretty tedious producer – the recording process was easy and fun. Even the photo-shoot production and album design were super fun. What I found a little more challenging was navigating through the release after the album was done. Having a great album is a bit like acquiring a gold mine. You have this great asset – but you still need to get it out from your cave and into the world.  I now needed to build my team of “suits” to help me market the album.

Who are some of your influences and who are you currently listening to?

In the world of jazz, Billie Holiday, Ella Fitzgerald, Louis Armstrong, Dinah Washington, Sarah Vaughan, Nina Simone, The Rat Pack… there are so many, but that’s a start. As a violinist, I’ve been brought up with classical music, but since discovering jazz violin my influences have been Stuff Smith, Stephane Grappelli, Joe Venuti and Eddie South. I also enjoy middle-eastern, world and classical music, which have definitely influenced some of my musical phrasing and creative choices. Currently I love listening to Melody Gardot and Idan Raichel.

What clubs in Miami are you favorite to perform at?

Usually Friday nights you can find me at Soya e Pomodoro Downtown Miami. The place has a magical ambience and is probably one of Miami’s best kept secrets. On Sunday mornings you can find me at the incredible Setai Hotel for the most lavish brunch around, and the band is featured on a beautiful stage right on the water in the courtyard. It’s always an experience performing there, and since we’ve done that brunch for some time now, we’ve kind of become synonymous with the Setai brunch band.  Then there’s The Betsy Hotel, well-known for supporting the arts and local musicians in the community. I’m usually there a couple of dates during the month, one of which is the last Saturday of every month.  Lastly – I look forward to the season beginning again soon at the Faena Hotel on Mondays – in the living room lounge. I’m in love with the space because of its Hollywood Glamour throwback design. It’s the perfect backdrop and setting for the style of Classic Jazz that we deliver.

Miami is often known for electronic music and reggaeton, how has the city influenced you when it comes to music?

Miami’s music scene has affected my musical path – but not in the way that you’d expect. When I first moved to Miami from NYC, Miami was primarily a place for DJ’s to thrive, so it was more difficult for me to land gigs here. That fact propelled me away from the live music scene and I decided it was the perfect time to get my audio engineering education and go more into production, as well as into the theater scene in Miami. But somehow in 2013 the Miami jazz scene really began to pick up steam again. At that time, I came back to jazz full circle, but now armed with the audio engineering, production and stage experience.

Violins may not be the first instrument that comes to mind when thinking of jazz, why do you think the instrument works so well?

It’s true that maybe these days, violins are more closely associated with classical music, and don’t exactly come to mind as the first instrument when thinking about jazz, but the fact is – they actually were very much a part of Jazz music in the earlier days, likely due to their very portable nature, and in Gypsy Jazz settings – the violin was a pretty prominent instrument. Horns are usually much louder than violins, which is why for the live music scene they’ve become so popular as a solo instrument. However, once amplification came around that problem was solved for the violin.

Do you think jazz is better heard in the studio or in a club?

That depends on the engineer… Haha… Well, assuming that the band is the same, and the audio engineer is great in both settings, it’s actually just a different experience, but I love both. The main difference is that in a live setting – the audience, in my opinion, is actually a pretty influential part of the performance. The exchange of the audience’s energy and attention alters the band’s vibe in the moment, so the music is always a little different. The studio is a bit of a more controlled environment, the collective energy there is that of the musicians, the engineer, producer, the organic studio vibe, and of course the focus is the musical intent and production goals.

We see jazz being sampled in hip-hop by the likes of Kendrick Lamar as well as electronic music with St. Germaine’s “Rose Rouge,” why do you think the genre is so harmonious to other genres?

Well, jazz is one of those styles that is constantly evolving and branching out. Since a primary concept in Jazz is to also be able to improvise and perform in the moment, it works as an incredible element in every style but very much parallels hip-hop’s trait of improvising in the moment, aka freestyling. Hip-hop has certainly also evolved a ton over time and I do love hearing specifically those two styles intertwine. One of my personal favorites is of course Guru’s “Jazzmatazz”. But, again, I think it goes back to good music transcending style… and when it’s creatively done right – styles can definitely be fused together and combined to form a new flavor.