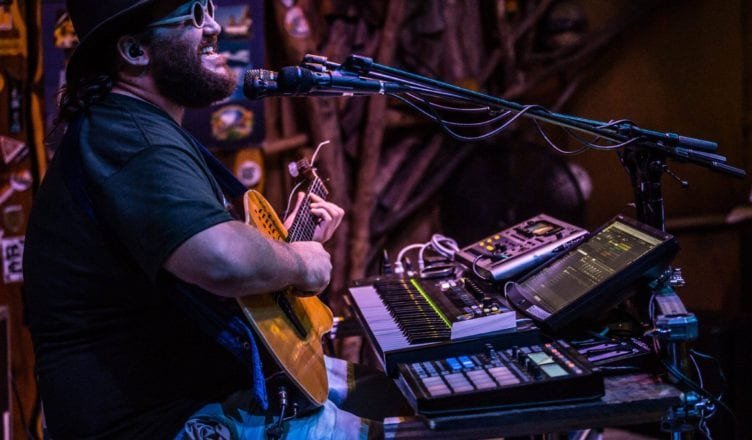 I’ve been booking bands as an occupation for far too long.

After a while one could say that that you can become desensitized. Much like a paramedic or mortician. They see blood and guts and press on matter-of-factly just as I frequently hear a new band and determine their value based on quality and draw.

That being said, every once in a while an act comes around that splashes water in my face. It makes me smile like I did when I heard something original and heartfelt, long before I got paid to listen and judge.

Zach Deputy does that for me.

Perhaps it’s the fact that his well documented diverse background comes together in such a genuine style. Zach’s general show consists of him literally constructing songs right in front of the audience organically via looping beats, rhythms, melodies and voicings. It becomes a journey with him and the audience to see where the song goes. To see what part of him gets revealed.

Will this song be a Latin vibe? Caribbean feel? Blues? Or maybe all of that shit in a big bowl with a wooden spoon in it.

Zach Deputy is almost always on tour. But luckily enough his home base of Savannah, Georgia is close enough that we get to enjoy him here in Miami once or twice a year. Which is very fitting as he puts it, “Miami feels like home to me with the perfect mix of European and Latino cultures just like me, aka. The Puerto Rican Redneck.”

Indeed he is. The only thing that might rival Zach’s extraordinary musicianship and soul is what an incredibly nice guy he is. His first show at the North Beach Bandshell, Sunday, December 2 at 6 p.m. should be pretty epic. Let’s all give Miami’s adopted son the homecoming he deserves.