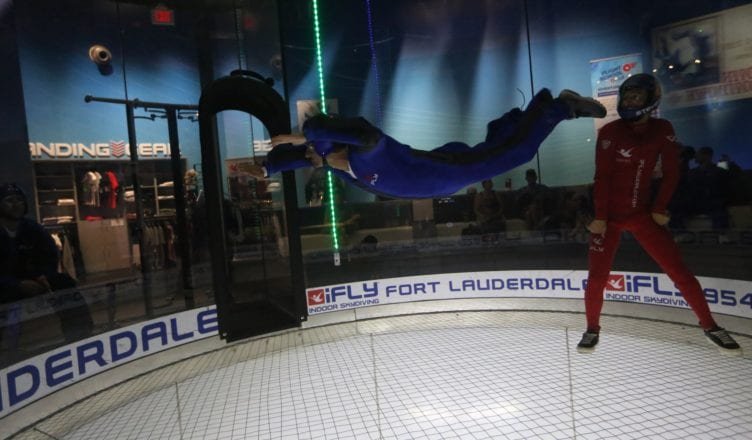 I’ve fallen into the bad habit of seeing everything as a routine. Here I was driving up to Davie to go indoor skydiving and I was acting like it was just another Sunday morning. Not even the odd shaped iFLY building resembling an E that tipped over to its side woke me up.

Skydiving was something I’d always had a vague intention of attempting, but I’m 40 year’s old and I’d yet to step on to a plane I had any intention of jumping out of. This invitation to test out IFLY’s indoor skydiving and their virtual reality helmet might be as close as I ever get to skydiving. But on this morning I entered their facility with the blase attitude like I was entering the mall to buy socks.

We were greeted by Steven, our enthusiastic instructor who brought us into a classroom for a training. They showed us a video of what to expect and various hand signals we should memorize. A peace sign meant straighten up your legs, crooked peace sign meant bend your legs more,  hang loose sign meant relax your body. It looked easy enough. An added burst of overconfidence came from the fact that besides my 35 year old brother and myself the other members of our group were two ten year old boys, and a 13 year old girl. If they could handle it, this would be cake for a grizzled old guy like me.

We packed the things that weighted us down like keys and cell phones into a locker and then threw a jump suit on over our clothes. That was followed by safety goggles, ear plugs, and a helmet as we filed into the seating area outside the wind tunnel. The kids went first. They twirled and spun around like pint sized superheroes in two minute increments. Soon it was my turn. I walked toward the tunnel. The loud jets of the wind reminded me of being trapped in a room with an orchestra of leaf blowers. I found myself holding my breath in panic. I told myself I couldn’t chicken out. These kids survived, I would too.

Steven encouraged me to fall into the wind jets, I couldn’t understand what I was supposed to do, so the poor guy had to carry me up. I was flying, but at the same time I was forgetting to breathe. Then I remembered what they tell you to do when you’re lifting weights, make yourself breathe out, so that you’re forced to breathe in. Only problem was I started drooling everywhere.

Steven flashed me hand signals. I couldn’t remember what was chin up, what was relax, and what did the middle finger mean? Eventually I panicked and ate it. I tumbled down on the chickenwire-esque floor. Steven got me back up in the air. My two minutes felt like two hours. But lights flashed and I made my most confident move of my first session and that was pulling myself out of the tunnel.

My brother returned to his fraternity days and encouraged all the kids to give me a hi-five as I walked to the end of the bench. I watched the kids as they effortlessly flew. I  had the option of watching a giant TV screen of my failed attempt, but that held no interest. At that moment I felt changed. Not a permanent change, a momentary one. Like too many of us I spend too many of my waking hours staring at a screen. While it helped that my phone  was locked away from me, I realized indoor skydiving forced me to be in the now in a way I too rarely am. Because if you weren’t clearly focused on your body and your movement you would fall face first.

I went into my second session slightly more confident, yet still drooling. Steven motioned for me to have my hands at an angle which made my body spin in circles. I still felt a pang of terror even though at the worst I would fall six feet instead of six thousand. This time I stayed adrift.  My two minutes of concentration felt impossibly long, but I survived this session without further humiliation. It’s funny that I needed a hi-tech artificial environment to teach me this, but perhaps there was a lesson to be learned that I could apply to my daily life in being more aware of my surroundings and the here and now.

He slapped a cell phone into a helmet that I placed over my head so that all that was in my field of vision was the screen. I walked into the wind tunnel and got horizontal. The virtual reality kicked in and I decided to forget every wise lesson I had learned. The simulation was incredible. All of a sudden it looked like I was flying in the most picturesque canyon you’d ever seen. I was free flying over the mountains and it looked and felt so real. I was ready to log into the Matrix.

As we wrapped up Steven took a solo turn in the wind tunnel showing us the possibilities. He was in his element and was maneuvering like a cross between Superman and Baryshnikov. Leaping up thirty feet in a  single bound and coming back down to the ground a moment later. It’s incredible that we have the technology to make a man fly even if it is only  in a confined environment.

We marched out of the wind tunnel and took off our jumpsuits. I still felt a hint of adrenaline . Maybe this experience would transform me permanently into an action junkie who finally skydives out of a plane?  Maybe it would make me put as much thought into the present as I do in the past and future?

I got my phone out of the locker. I had two messages and a missed call.