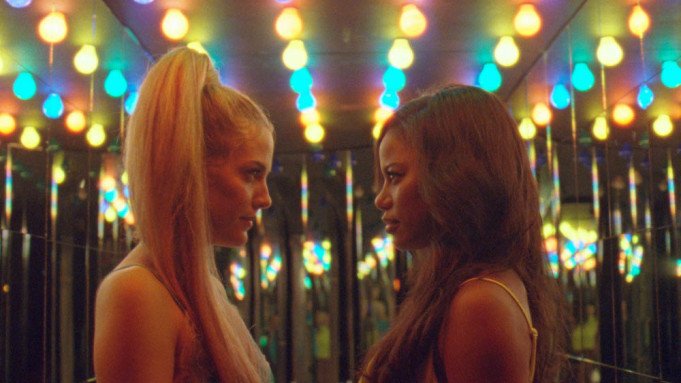 After Spring Breakers, The Florida Project and now Zola, there are slowly becoming enough flicks showing the depravity and trashiness of the Sunshine State, that there could be a new  film genre called The Florida Girl movie. The girls in these movies and their companions have had all morality melted by the humidity and stupidity surrounding them. There are no lessons learned in these Florida Girl movies, rather they are character studies giving the other 49 states a superiority complex and reason for them to root for the Florida peninsula to sink underwater.

The newest Florida Girl movie Zola has gained some notoriety for being the first feature film to be based on a series of Tweets. It’s kind of like Battleship a few years ago bragging about being a movie based on a board game. You’re going to get the kind of depth you’d expect from these unlikely source materials.

Zola much too faithfully adapts the Twitter thread of a stripper who recounted her misadventures of heading down to Tampa with another stripper and a couple of strange dudes. What follows is sex, violence, and mayhem. What’s lacking is a point for us watching it all. There was one funny joke and one creepy moment that made me wonder  what would come next, but I kept waiting for a reason why this story needed to be told, other than to demonstrate how far an R rating can go.

As the credits rolled I continued to wait.

Zola wasn’t a complete waste of time. The cast stays committed to their crazy characters, and director Janicza Bravo crafted some interesting shots, though they aren’t for the prude at heart, as her most inspired framing involves women urinating and bare penises. But someone should have realized a story that works for a seven minute scroll on Twitter might not have enough poignancy for a ninety minute film.

The new cartoon sequel of the 2016 cartoon The Boss Baby makes up for Zola‘s lack of plot with enough story for two or three movies. The original The Boss Baby  was an animated reincarnation of Look Who’s Talking exploiting the comedy inherent in babies talking like adults. Some said it captured the zeitgeist of 2016 in that the boss baby was voiced by Alec Baldwin who also  imitated Donald Trump on Saturday Night Live.

But now it’s 2021 and everyone is sick of the Donald and his imitators. So where does the Boss Baby fit in Biden’s America?

It fits in my 8 year old daughter’s heart, that’s for sure. She demanded to watch it all three times the reviewer screener was available to us before it self-destructed.

“What’s happening?” I asked her several times like when it was unclear to me why a character was singing a Cat Stevens song.

“I don’t know. There’s a lot of action,” she said as she went back to playing on her tablet while sucking in The Boss Baby: Family Business by osmosis.

Near as I can tell the heroes from the original movie are now grown up. One of the grown up kids now has a boss baby of his own. And the adults are transformed back into kids to stop an evil baby from turning all adults into mindless zombies.

I’m not sure why they went away with what made the first movie decent in exploring the comedy of babies acting like over serious adults, but I guess it works for kids.

For this over serious adult Boss Baby 2 didn’t work. It even almost had me longing for the simplicity of Twitter.